Welcome to Hampton Township by the Bay 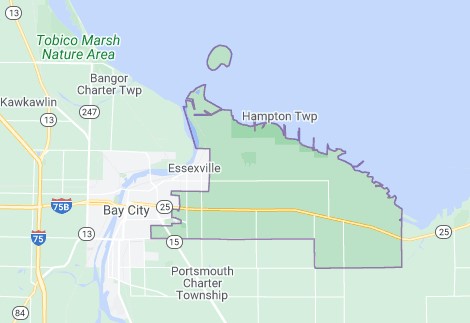 Hampton Township is located in southern Bay County, which is in east central lower Michigan along Lake Huron. The Bay County region is largely rural with the majority of the land being used for agricultural purposes. There are 444 square miles in Bay County and approximately 30 miles of Lake Huron shoreline. This shoreline is wholly contained within the Saginaw Bay watershed, which is the largest drainage basin in Michigan, and also contains the largest contiguous freshwater coastal wetland system in the United States.

Much of Hampton Township’s history is associated with events that have happened in Bay City and Essexville. The Township’s past is also linked to the growth of Bay County during the late 1800s and early 1900s. Back then, the economic fate of the area was dependent on wood, salt, coal, and agriculture.

Beginning in the 19th Century, in 1855, the Dutch arrived and began farming after the trees were cleared and the land was drained. The town of Essexville, located just west of Hampton Township, was built on a site where Nabobish, a Chippewa Indian chief and his people, had settled. Nebobish Avenue is roughly the southern boundary of this settlement. This area was ceded in an 1837 treaty negotiated with the federal government.

In the 1800s, this area was also a popular place for fur trading, given its strategic location where the Saginaw River empties into Lake Huron. Carriere & Company built a saw mill on the Saginaw River in 1867 and employed 30 people. The Atlantic Salt Company was established shortly thereafter. Together, these operations attracted laborers who purchased land to build their homes. Log homes were commonplace. Many other mill operations soon followed.

Ransom Essex took great interest in this development and served as Hampton Township supervisor during the Civil War. After the Civil War, a growing force of laborers settled the area, and in 1868, eight acres were platted.

Other highlights from the 19th Century include:

Moving forward to the middle of the 20th Century, many improvements were made in the Township during the 1960s. Included was the expansion of a water distribution system, construction of a sanitary sewage collection system, creation and staffing of a Department of Public Works, and expansion of the administrative offices at the Township Hall. As development continued, a Planning Commission for Hampton Township was created in 1969.

The 1970s was the period of greatest growth in the Township's history. During that period, over 2,200 new housing units were built and a major shopping center was constructed. Public improvements included numerous sanitary sewer extensions, construction of a major storm drainage system, development of a senior citizens complex, three new Township parks, expansion of the Township’s administrative offices, and the paving of most section line roads in the Township by the Department of Public Works.

In the early 1980s, local and national economic recessions greatly slowed the rate of growth in the Township. After the recession, there was some growth in Hampton Township, however, it was much less than the growth during the 1970s. And today, while the economic future of Hampton Township is clearly linked to broader regional events, innovation at the local level will ensure Hampton Township is a quality place to live, learn, and work.